ICC Intercertus Capital Limited, a company registered under the laws of Cyprus with registration No. HE 346662. The Company is regulated by the Cyprus Securities and Exchange Commission (“CySEC”) under License no. 301/16.

ICC Intercertus Capital (Cayman) Limited, a company registered under the laws of Cayman Islands with registration No.  CR-326096. The Company is regulated by the Cayman Islands Monetary Authority (“CIMA”) under License no. 1444866.

We’ve sent an email to with detailed instructions on how to reset your password.

Don’t forget to check your spam folder just in case you have not received the email.

BACK TO NEWSROOM
News

The words “tech giant” get thrown around an awful lot. But there’s really no other way to refer to Alibaba. In this particular company’s case, it’s actually not an exaggeration. Many refer to Alibaba as China’s Amazon but this fails to do the firm justice. Alibaba has its fingers in considerably more pies than just online retail or the cloud.

The group is currently involved in e-commerce and online retail platforms, cloud computing and AI, Fintech and online payments, entertainment and ticketing, online services and more. Its current CEO, Daniel Zhang, sees the company as an economy in its own right rather than just a company.

In fact, if the company’s growth forecasts are anything to go by, by 2036 Alibaba’s gross merchandise volumes will rank it as the world’s 5th largest economy.

However, this former dream IPO and investment darling has fallen out of the spotlight ever since the US China trade war began. This is despite outstanding performance that would be the envy of any US company. So, is it time to look elsewhere? Or is Alibaba still a stock that you absolutely need to own? Read on for both the bull and bear cases.

Why not to buy

We’ve seen a lot of red in US-listed Chinese stocks of late. They sold off amid fears that the White House was considering a new set of restrictions to make it difficult for US companies to invest in China. These included blocking government pension funds from investing in Chinese companies. There was also fear that the government might force exchanges to delist Chinese stocks that trade on US exchanges.

While these fears haven’t come to pass and indeed some have been put to bed. The mercurial nature of the US president and the uncertainty surrounding US-China trade relations certainly increase the risks of investing in this stock over your regular FAANG options. And that’s not just because of the trade war.

If you consider the sheer size of Alibaba, if it were a US stock you can be certain that it would be in the crosshairs of policy makers owing to monopoly fears. Its size and reach makes it particularly vulnerable to a worsening trade war as it touches on so many verticals.

The media has also focused in on the certain unsavory practices that still plague Chinese firms and set them aside from companies like Amazon. These include the sale of fake merchandise and certain, shall we say, creative accounting practices that seem to be part and parcel of dealing with China as it becomes inducted into the global markets.

But perhaps the greatest concern is the macro environment. Only the staunchest “business as usual” commentators are still not prepared to accept that we have entered a global slowdown. While China has done a great deal to develop its own internal markets so as to be less reliant on global trade, this doesn’t completely insulate it from the macro situation.

Since their peaks earlier this year, Chinese stocks are uniformly down. Tech rival Tencent is down almost 19%, China Mobile is down more than 25%, China Life Insurance Company is down over 13% and China Petroleum & Chemical Corporation is down a whopping 32%.

Alibaba has performed better than all of the above, since its 2019 peak of $195 back in May it is down some 11%. Currently trading at $173, the Alibaba’s stock price has set a total of three daily higher lows this year and appears to be edging to the upper bounds of its trading range.

Of the Chinese stocks mentioned, Alibaba is the only one that’s not looking decidedly bearish, technically speaking. They are all forming lower-highs and lower lows and some are coming down to test multi-year lows. Alibaba, on the other hand, has been range-bound throughout 2019 and appears to be consolidating. 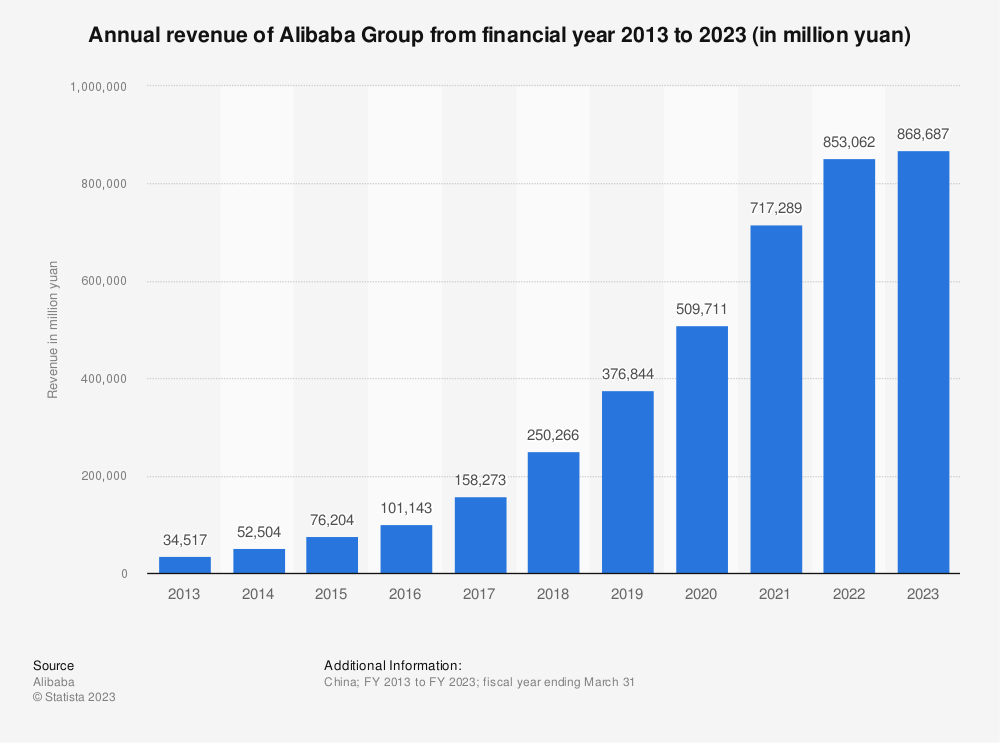 The company has also bested the EPS expectations of analysts for the last four quarters in a row. When Alibaba reported its quarterly results back in August, revenues were up 42% year over year and annual active customers had increased by a staggering 20 million. Add to this a 66% increase in the group’s cloud computing business and you can bet your life that if this were not a Chinese stock, people would be raving about it.

It’s clear that when Jack Ma, the company’s larger than life figurehead, stepped down as CEO in early September he didn’t leave the group in a power vacuum. He personally hand-picked Daniel Zhang as his successor and the company appears to be full steam ahead in this post-Ma era.

To buy or not to buy?

This is, of course, largely dependent on your individual risk tolerance and the current make-up of your portfolio. What we can share is that according to the Wall Street Journal, 100% of the 48 analysts surveyed currently rate Alibaba as a buy. Similarly, of Market Beat’s 25 surveyed analysts, currently all 25 have Alibaba as a buy.

Yesterday, Alibaba Group Holding Limited announced that it will be reporting its unaudited earnings results before US market open on Friday, November 4. This will be an interesting report to keep abreast of as it will reveal whether Alibaba’s growth has continued unabated, or whether trade frictions and the general macro picture are becoming headwinds to the company’s growth.

Disclaimer: This article is not investment advice or an investment recommendation and should not be considered as such. The information above is not an invitation to trade and it does not guarantee or predict future performance. The investor is solely responsible for the risk of their decisions. The analysis and commentary presented do not include any consideration of your personal investment objectives, financial circumstances or needs.

Risk Warning: Our products are traded on margin and carry a high level of risk and it is possible to lose all your capital. These products may not be suitable for everyone and you should ensure that you understand the risks involved. Please read the full Risk Disclosure Statement.

What’s Going on with the South African Rand?

Next Article
WE ACCEPT

It takes a few minutes and even fewer clicks to enter the promising and exciting world of trading. Take the first step by clicking the link below.
Trading involves significant risk of loss